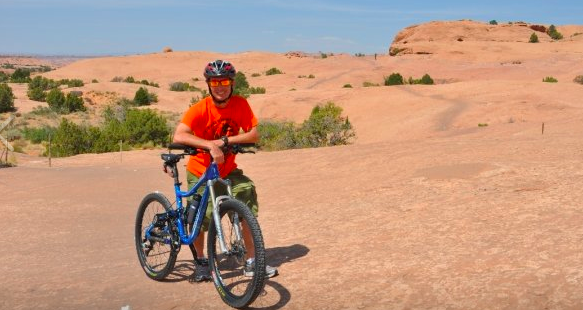 45 mi. Nobody likes to hear that sound. It’s the crunching of metal, carbon and a thump of someone going down. I always say, a fully grown adult that comes out once a week makes a special sound when they hit the ground. It’s ugly and sad, and sobering because I hope it’s never me.

We started as a small group, Suzanne, Izzy, Chris, Lisa and Barry Reiss. Loggerhead park at 7am. I had a few beers last night and afternoon at Chris and Lilia’s bar tour by bike thing, so I convinced myself that rising and going for my first ride of December (On the 22nd) was a better idea than burping up beer taste and staying in bed til 7:30 then wishing I would have ridden.

The wind was out of the southeast, meaning just like most of my Ironman training, it would be amazingly easy to pedal north – and a streetfight coming back home. We went at 23-26mph up the beach road and Jupiter Island, stopping at Bridge Rd for a pee break. Barry and Lisa turned for home, the four of us remaining headed for Cove Road, the first traffic circle in Port Salerno. We rode fast with the wind, sometimes I struggled with my less-than-once-a-month cycling fitness to keep up. It’s a good group of folks that ride more than I do – they take this more seriously than I do. When I see December-April on the calendar, it means marathoning and running. But not for everyone.

I get dropped on the final segment of road heading into Port Salerno. Izzy goes 29mph and I know what waits for me heading south into the wind so I don’t follow. I’m less than 100m behind, but I get snarled with a chubby guy in a big Tahoe dragging a boat thru the traffic circle. Apparently right of way only counts for large metal objects, not Dave on a carbon fiber wafer of a bike. I take 1/2 mile to link up with the group as they grind into the wind at 18-20 mph. We work together to stay in a tight formation and use each other to draft.

At the train tracks, we see Christina Butler and another guy waiting for us to head south. I thought I saw her nested in the group that rode to Sandsprit that passed us heading north, but nope, they’re here waiting for a pull back home. They hop on our wheel and we head south on the most exposed section of road. Izzy pulls half of it, I do the other half, keeping us as close to 19 mph as I can. Once we cross the tracks, Christina asks me ot go forward, to which I say,”I just plled, I am resting in the back.” Izzy also gets an invite to pass, but we keep our lineup intact. We go down Gomez Road with Suzanne then Chris pulling the first half. Izzy gets her turn up front, I am following. She rides strong into the wind on Chiara’s bike for sale. About halfway through, behind me I hear that spoke-crunching sound, and a “crap” or “f#ck” yelled out  by the guy Richard with the slick Pinarello. I tell Izzy we have someone down and we turn to see Christina on the grass. Chris is already with her keeping her head and neck stablized – great to have pro EMTs on the ride! She has injured her shoulder, her bike is ok, but she is shaking on the ground. She answers all of Chris and Izzy’s questions, so she’s ok with an injury. Her husband is ridnig in the large group behind us somewhere. An ambulance is called, they arrive and send her to Jupiter Medical Center. 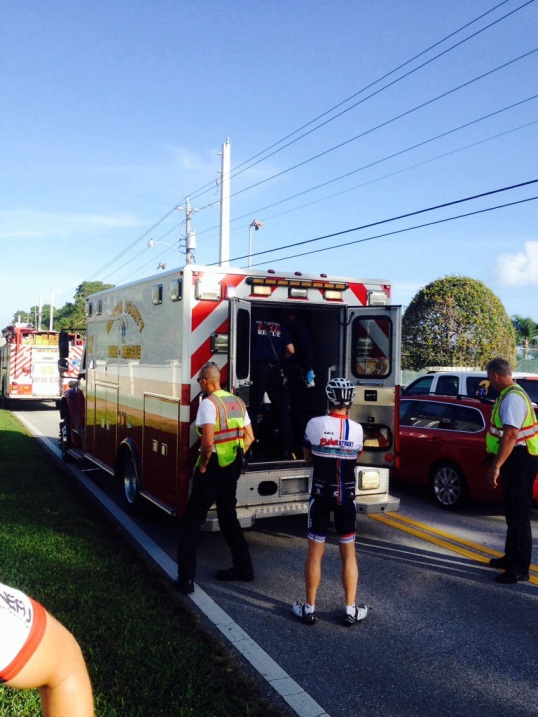 The large group catches up and gets our story, then we ride back with them. I know my cycling fitness has eroded because everyone is moving really well and I’m working very hard to keep the pace. These folks have cycling fitness, and I am out of shape in this realm. People are doing well and I am behind. Lesson here.

A challenging ride south ended at Loggerhead Park, where I was happy I got up and together for the effort.