We had great weather conditions for this event, we had 60 degrees at the start and 63 degrees at the finish line two hours later. The team dinner was good reconnecting with the group that comes to this race each year. Only Miami Marathon has more pacer people!

My morning started early as I woke up at 3 am for unknown reasons. Not a bad thing, it’s good to have extra time to prepare. Everything in that realm is well sorted, I drive to the race and park in a new place – a dry cleaning business that’s closed for the day. I am only 2 blocks from the start line. I know the pacers are meeting at 5:15 for a photo, I’ll have been to the restroom already and in place for that. My group at the lineup consists of all ladies… Jennifer, Valerie, Keibe, Hannah, PJ,  Lori, Sondi, and Jennifer Keyes whom I know from Palm Beach county. The other Jennifer lives or runs in Jupiter, Fl. I tell her about our group and where we meet each week for long runs. Lori and Sondi ran with me last year in the 1:50 pace group – they will look to stay with me for most of the miles then surge ahead later if they feel good. Hannah is someone that knows Pacer Kristen and was told by her that my 2 hr group would be a good fit. I give a brief talk on how we handle water stops, reminding everyone to tie shoes securely and that I will do most of the talking when the going gets tougher in their later miles. A guy dressed in orange named David joins in with us during Mile #1, he stayed for most of the race before scooting ahead in the last 2 miles.

We ran the first mile in 9:54, above the recommended 9:07 pace but the road heading out was crowded. Plenty of people disregard the pace per mile signs and feel if they are in a race, they need to be near the start point. It’s considerably different than the 1:50 group which I’ve done for the past three years. In those years we galloped to pace pretty quickly. Mile #2 had us 20 secs closer and by Mile #4 we were within 10 secs of perfect timing. I chatted with some of the frontrunners in my group, we are behind Pacer Callix and his 2 hour gang. The Galloway 2 hour group correctly starts behind us, almost catches up and then takes their walk break. We do well on the first “out” portion of the course to the turnaround. I remind the group to drink and eat their nutrition before they feel hungry or thirsty. I guess that my group has a dozen people, plus a few of the “followers.” Followers refers to the runners that won’t say they ran with a pace group – but they tail us the whole way until they drop off or zip ahead near the finish.

At halfway, we turn towards home and a few have peeled off. I told folks that we would invariably go through the turn area mile a teeny bit slower than we should, there are porta potties, two aid stations and a run over the halfway point timing mat. We leave there and hit Mile #7 about 12 seconds slow. Hannah is now up front running next to me. Her mom is in the race, too, following a slower pace team. Her dad was at the turnaround, they are Space Coast locals! Today’s run will be a personal best if she can finish in the 1:5x:xx zone with me. Our group is good as a gang of 6-7 in the 8,9, 10 mile areas. We pass a few people, I invite them to join and stay with us but they are already tapped on energy for today. Hannah says at mile 9 that it’s beginning to become a struggle. I fill her with only positive thoughts about how she’s already done all the hard work in training, the majority of the miles are already done, and how soon we will be celebrating at the finish with a group photo! She was so good in breaking through whatever she was experiencing. My chats with her got head nods and positive smiles and affirmations. This was us running down River Rd. one on one, going for her best time ever. So fun!

Well here’s a race day first. At around 10 miles, I reminded my group to use the nutrition they brought. Eat a gel, chew on the gummies, whatever, don’t think that taking anything any later in the race will help your performance. Hannah pulled out a sleeve of Clif Shot Blocks, the same thing I had in my pocket. She futzed with the packaging, and I offered to help her open it so she could focus on the running. She said she was ok and that it was open and ready now. Seeing her eat the gel block, I thought I’d use some of mine – the flavor I chose to carry today was a good one. I keep mine in non-ziplock plastic sandwich bags, so they are easy to reach in and grab. I put one in, chomped down and felt a crunch. Huh? They don’t crunch! I reach in and remove it from my mouth, along with a 35-year-old tooth crown stuck to the gummy. Really?

I pulled the tooth off the gel and store it in my Nathan 10k pouch. I’ll be glad I did that vs pay for a new one to be created. I tell my group what happened to many laughs. Seriously, I exclaim – “I will do anything to help you reach your goals, including shed body parts and other essentials!” This lightened the mood for ½ mile and made for a good bunch of laughs as we rolled forward with less than 5k to go.

At 11 miles, I told two of the runners, David and one of the gals to go faster if they felt good. At this point, the bridge at the base of the finish line area was well in sight, I used that to encourage them to really go for it, which they did. Hannah also soaked up these truths, she was a mere 19 minutes from the best time she has ever had, and although hurting some, I kept encouraging her to just run with me, not waste energy talking unless she wanted to, and keep rolling forward. I distracted her and the group back at the turnaround, asking them to “remind me at mile 11.5 to share with you my confession for the day.” That builds curiosity and Hannah was quick to remind me once we passed the 11 mile flag. I told them that our goal as a team was really to finish 30 seconds early – if they were with me and had started in my group, they were definitely going to get a sub-2 hour time if we finished together. I think that realization, with the tall condos and finish area in view, helped Hannah and two other gals significantly. They knew and believed they could!

The final 2 miles had all of us making sure we had good bib placement and smiles ready for the on-course photographers. I told my group the photographers usually sit on the long last straightaway. I also cued them in on the fact that spectators line the road and final finish area and these folks would be cheering for them. “Tingle time” for Ms. Hannah! She was right with me and at 12.5 miles I told her to run for the finish, she was so close, the last 800m was only two laps around a high school track. The rest of my small group did the same. Lori and another gal we had passed lined up next to me and sped up. I explained that I had to finish on time, but they were encouraged to surge if they had energy and felt good. For the final half mile, only I ran in with the 2 hour Galloway pace group leader. He said his group ‘kinda all ran with me, the run pace of a 2 hour run/walk group was pretty aggressive he explained. So I finished at 1:59:27, almost tripping over a rug they put done on the last curve to cover wet dirt. I took good pics with some in my group at the finish. Hannah was clearly the star of my group, she fought hard and really achieved what she hoped for a mere two hours before. 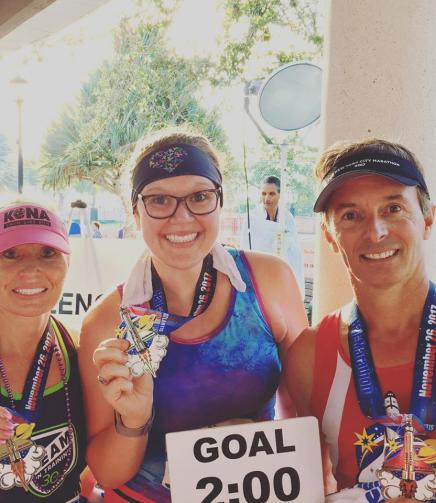 It’s very rewarding to have been a part of that type of personal triumph. I know she was working hard and feeling discomfort. A few of the others met me at the finish line to thank me for the experience. I waited for a few of the girls I started with who finished in 2:02, 2:03 range.