Our best weather yet for the seventh Palm Beach Marathon, this year we were introduced to a new course. The route took us north for the first 1.5 miles, south again past the start/finish line area, and south to Manalapan towards the Ritz Carlton Hotel.  I brought Shelley Thompson and Heather Smith with me this year, they were staying with me having flown in from Minnesota for this race.  Charlotte and Stanton were around for the race start, Austin Daniels was running his first half marathon, no sightings of Carolyn or Chiara.  The temps were in the low 50s, slated to not eclipse 70 at all this day.  No wind, this was a great chance to score a good time.  I declined to run with Kyle Smith at a 3:15 pace… I don’t have that. Yet.

I wore long legs and an underamour shirt to make sure I wouldn’t be uncomfortable on the cold side.  I ran with Perry for 5 miles, then two miles with Rick (which the Brightroom pictures will prove both true) and always felt like I had to think about the pace. I know with Perry I was near the 3:25 finishing pace, and I wanted to keep slightly ahead of that.  When Rick broke off at 7 miles to return to the half marathon finish, I tried to engage the few spectators I saw along the way. A few people were in their driveways, one crew was tailgating with early morning grille food.  The trot through Lake Worth is safe, car free, but boring.  I ran with Lanae barnes for a short bit, she said she was tired and admitted that she went out too fast.  The new “turn back north for an extra 3 miles” section was neat, separated by a row of bushes it was hard to see who was heading south again already ahead of me.  I saw Eileen Turrenne, Kyle Smith, then made my turnaround by an enthusiasticly manned drink stop.  On the way back south, I saw Charlotte and her pacer, Jessica Crate (!) the 2:50 marathoner/model.  Once at 16 miles, just before the bridge to Manalapan, I put my headphones on.  That helped, even though I saw my time gap to a 3:20 finish was always still off by minutes.  The course turned North again in Lantana, where full marathoners were put on what seemed like an endlessly long straightaway.  Fortunately, I like that – look into the horizon, see taller buildings and know I have to end up there.  The temps stayed cool, and I really from mile 18 til the end only had experiences with about 4 or 5 other full marathoners.  I stopped in a port o let to pee etc. because I had the long leg

pants on.  That delay was only about a minute.  I found Kyle Smith, moving at a lower than he should have been at pace, he was finally done.  Too much effort in the first half of the race killed his 3:15 chances.  At Southern Blvd, I took water and had to stop for traffic, even with a police officer acting as a crossing guard.  Even on a closed course with music, you still have to watch things!  My last 2.5 miles were ripe with puckering calve muscles on one leg, general fatigue on the upper thigh of the same leg. I was happy to get to the Palm Beach Atlantic circle, but this year no big contingent of young college students to cheer with.  A good effort bending around the last big curve on Flagler Drive at Okeechobee, and I knew my time would be just over 3:20 – fine by me for the lack of interval and “at pace” training I had done.  I finished in 3:21.xx. They have a video of me finishing, it really looks like I could and should be going alot faster.  http://tinyurl.com/26de8os

At the finish, I was surprised most of my friends that did the half marathon were already gone. I waited for Charlotte, who finished in 3:39 and won the 30-34 age group. My result posted as fifth in my age group, but I was sent a medal for third place a week after the race – maybe two of the others were taken out for prizes in the Masters Division?  Austin and his mom were there, all that was left was a massage and waiting for Heather and Shelley to finish.  They did at near 4:35 for Shelly at 4:49 for Heather’s first full ever. They were both very challenged by the warmer weather we have here over Minnesota.  When Austin and I went for the massage, I was setup next to Charlotte’s pacer. What a talented athlete! Apparently she wants to go to Olympic Trials for marathoning. Neat to see in person, I would not have guessed her a sub 3 hr marathoner.  The day went forward from there, Heather had stomach issues, Shelley and I were poolside and had Carolyn and Suzanne with Mia as guests.  I have already registered for next year’s race – number 8. 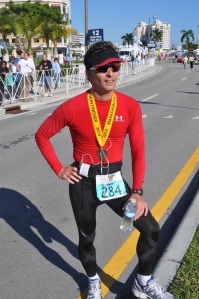