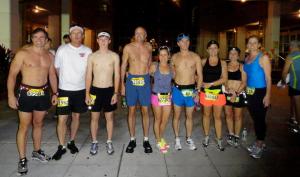 26.37 mi.  Keep thinking all week that something special will happen weather-wise, even though all reports on every website say TOO WARM TO DO WELL! They stated 860+ full marathoners and 4500 total racers, this event is growing deservedly so. I left home at 3:45am with Walter, drove to the usual $5 parking lot East of the start line, and got to the race area before 5am. John came as a photographer, Austin and Ron Daniels raced the half marathon and we met them shortly after sampling the bathroom row of porta potties. We met others on the museum steps, Suzanne, Adrienne, Seth Waller, Erica and Rick. A few pictures there, and then a warmup stretch and littlest of jogs to get set for the start. It was 71 degrees at 6am, with a breeze growing to a wind from the SSW. The race started on time (no train interference) and I ran with Adrienne and Walter for the first 6 miles. The route down Las Olas Blvd seemed less crowded, maybe I positioned myself better in the start corral.  Austin stayed with us at a 7:45 pace til we reached the Las Olas bridge, then he blended into the crowd behind us. The park had us slightly behind the pace schedule we wanted to keep, which was good, it was warm and we felt it. Walter surged a few times then rejoined us. Adrienne started to drop off our pace once outside the park and heading north to the half turnaround point. Walter stayed very nicely at the pace we kept, which was still higher than the 7:38-7:40 we thought we should be doing. At the break off point, I wished him luck, told him he had less time on the course than one of Paul’s track workouts, and I continued north on a slightly different course than in year’s past. I noticed some deviations, we went along the beach earlier, and the marking of the miles and the halfway point chip mats were confusing. I found myself off pace at 10 miles, and approaching the desired 1:40 half time with still no 13 mile marker in sight. I finally caught that at 1:42:xx and the mat was located right there, so I never saw a marking for the official halfway point. I pressed north now concerned I had lost 3 minutes somewhere. I went on A1A longer than in other years, the beach road just south of the neighborhood was under construction and not on this year’s route. We ran through the neighborhood, here I decided it was time to put negative split energy into the effort. I passed people I had found myself running near or with all morning. The one or two people that passed me I passed and made sure they weren’t keeping my newer pace. Now I was running south. The wind was straight from the south, and I had to concentrate to keep pace. I didn’t have a time chart and I was too lazy to do the math – all I remembered discussing with Walter was the 2:33 mark was where I’d approx. hit 20 miles and 3:02 ish at 24 I think. I wasn’t on those marks, I had left significant work to do on the back half of the race.  I found Seth at Mile 22, he was who I was going to pace with. I shied away from that when he said he did Miami in 3:09, I figured he’d have me on a frantic pace. I snuck up behind him and poured a water on his head, then he kept my pace and passed me for the next 3/4 mi. At the next water stop, he slowed to fix a cramp, and I didn’t see him with me the rest of the race. In the sunny beach exposed final 3 miles I bared down to keeping a 7:30 pace, sometimes a little quicker. I knew the wind and heat would be affecting me the longer I was out there, so I scrambled to get home rapidly. The familiar 1/2 marathoners walking the sidewalk heading north, medals and beer in hand, the other slow half participants that walked the last few miles, all right there. I came at the finishing park to notice the final change in the course, the 26 mile mark moved further into the parking lot and the finish line further away too. I saw John and Austin first, a few others like Erica and Suzanne along the fenceline, and then made the press to the line. I finished in 3:21:55, a second place for my age group just like last year. Unknowingly, the winner finsihed only 23 seconds ahead of that. Chip time means I didn’t see a guy ahead to catch, he may have crossed the line behind me!

I stayed too long in line for the massage, which unlike last year was not a good one. I had tap beer, stayed to hear some music and for the awards, saw a few people after their finish (Scott Richards and Seth and Christina Bilenki from FUR on Facebook. We took the shuttle bus back to the start area and spent a nice lunch with Walter and John at Krystals. I was very much mobile after the race, not sore or stiff. Recovery during the week went well, I have been taking the chondroitin, fish oil and protandin supplements so maybe that helped. Again I know I can pace better to lower my time, maybe Boston will be that opportunity.

Palm Beach MarathonDecember 13, 2020
Another warm one predicted, get done early!