101 mi It came together like a last minute thing. Lanae said she was looking to up last weekend’s 80 miler by doing 100. I said I’d try that, knowing and suggesting I like to leave and return earlier than most. Lanae suggested we leave at 5:15am, but on Thursday changed to include thee group she originally committed to. She was going with Suzanne, Adrienne and whomever from last week would join in. I could ride with them if I wanted to start at 6:15am. John had to run through some community service hours helping the Boy Scouts pick and sell vegetables, so he would need to be dropped off at 6:00am at the garden in WPB. He woke up at 5:00 am on the morning we were to set our clocks ahead an hour. He stayed in bed, slowly showered and ate breakfast, making us late for the garden dropoff and me late for my group start. WE began riding in the dark from Dunkin Donuts, the Artfest by the Sea was in town making a Loggerhead Park start impossible. We rode with a scattered bunch of lights and blinkers affixed to our bikes, clothing and helmets. It was slower going up to Gomez Road where we first saw reliabledaylight to ride by. We began riding single file from that point, not stopping until we reached the Tiki hut

on Hutchinson Island. That was a quick pee break, eat a Clif bar and back onto A1A heading north. We had some rain but very light and not for long. The road was newly paved and very exposed to swirling winds from the ENE. I tried to stay on good pulls for an extended period, allowing the others to hang tight behind me. This was a nice idea, but later in the ride I’d be second guessing this tactic.

We made it north to Ft Pierce, where construction forced us to detouralong a parallel road to the Ft Pierce Inlet. It put us out on A1A again right near the familiar Cumberland Farms service station and mini-mart. We met a guy with a 4-door Maserati who asked us about our bikes and the technology aboard. I had questions for him about his great car, too. We took a group picture next to the wh

ite roadmissile and fueled up for the well-lit return trip. I thought we fought most of the wind coming north. Something changed, we were going to get a most annoying ESE wind all the way home. I didn’t bring any additional Carbo-Pro to fill in my water bottles for the trip home, it seemed like the other three girls did. I was setting up for a series of issues later down the road with this oversight…

The ride home showed us very quickly that the wind would be an issue. We spoke of doing shorter pulls and keeping close together. Even when we were together, you were fighting the wind, it was impossible to hide behind the person in front of you. The Sewall’s Road is very exposed to the Intracoastal and today’s breeze. We worked together on this rolling road, having a few brush backs from cars that were afraid to pass cyclists, so the beep. Really? where should we go – no sidewalks or bike lane available on this stretch of Martin County road. We came south past the first (north) bridge. The went to the Shell station, same one as last week. Hassan, the owner, cameout and greeted us and did a few tokes from the hookah, just like last week. I ate my last Clif bar, and felt as if I was running out of energy. I had drinks left, diluted G2 with water and plain water. When we left the station I felt ok, l was keeping pace and pulling well, shorter durations as we had stuck with. At the Hutchinson Island Bridge, I noticed I had low energy when I couldn’t muster a good spin climb. All three of the girls went up and over, I kept a high cadence but in such a wimpy gear, I was slow to climb the hill. I went down and then fit into the paceline, but now going 20-21 was tough for me. We were shielded from some of the wind, still I was challenged to keep up. When I pulled in front, my speed

started out good but quickly decayed to 17 mph, that was my clue to get off the front. I stayed as close as I could to whoever was in front of me, kept drinking the fluids I had, but nearly 25 miles from home I knew the exposedDixie Highway section would be hard going. I told everyone I was falling off the pace, they were good with keeping me in the pace line and keeping the pace manageable. It was very hard to get the energy to pull the group and keep the pace, especially in the wind. I made it into the wind down Dixie Highway, then Gomez Road. I chose to stop and regroup myself at Bridge Road’s rest room, not sure why however. It was good to stop pedaling and get off the seat, but I had no replenishment planned, not that it would have done much. We started again and now I was really depleted. I knew the value of keeping along with the group, alone and broken in the wind I’d drip home at 15 mph, not good. I had to pickup John from his community service exercise, it was already past noon, way too long for me to be cycling out on a Sunday afternoon! I tried to keep pace but kept falling behind. I trailed the group down Jupiter Island, no longer helping with the pulling, it was enough work to just follow. I have only one previousmemory of a nutritional energy fail this significant, it was probably ten years ago and I broke with a bonk as I came to Coral Cove Park. Here I was, limping back behind a generous enough to wait Suzanne, peeled off the group at Coral Cove Park. More Carbo Pro in every bottle I kept thinking. Like what would happen if I had too much powder stuffed in the drink I kept thinking? Keep thinking and keep pedaling, up the familiar beach road and towards the car. Adrienne and Lanae kept their strong pace in the last two miles,Suzanne kept within eyesight as I plodded homeward at 16 mph. I made it back to the Dunkin Parking lot spent of energy. I didn’t have any time to socialize, it was now 1:15pm. I was sunburned on my arms and face and had no punch left in my body. I was salty, sore and gutted for energy. I craved food, a shower and fresh clothes. And rest, a quick hour of no activity would allow my system to recharge and not fall to low immune levels. I’ll come at the next 100 miler considerably different nutrition-wise. I was very glad today wasn’t a race or event I had to care about the results! 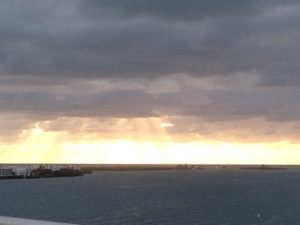