Our morning started out uneventful. The Hilton is a good place for us to stay, I was rooming with Jeff Zern from Arkansas. A few other pacers were waiting for us in the lobby, they knew I was local and could lead them to a good parking spot under the American Airlines Arena. Seriously, how is that so convenient and still only $5?

It was 59 degrees at 4:45 am when we arrived at the Start area. My Altra shirt fit tight, size small was – SMALL! I went to the restroom inside the arena and came out and made a really good decision. I did the pacer group photo at 5:15. Then, I went back to my car quickly and put on long-sleeved Under Armour shirt. It was cooler than I thought and temps were predicted to drop all morning. This shirt was my insurance policy. And it matched the graphics on the Altra shirt – bonus style points for the race pics. 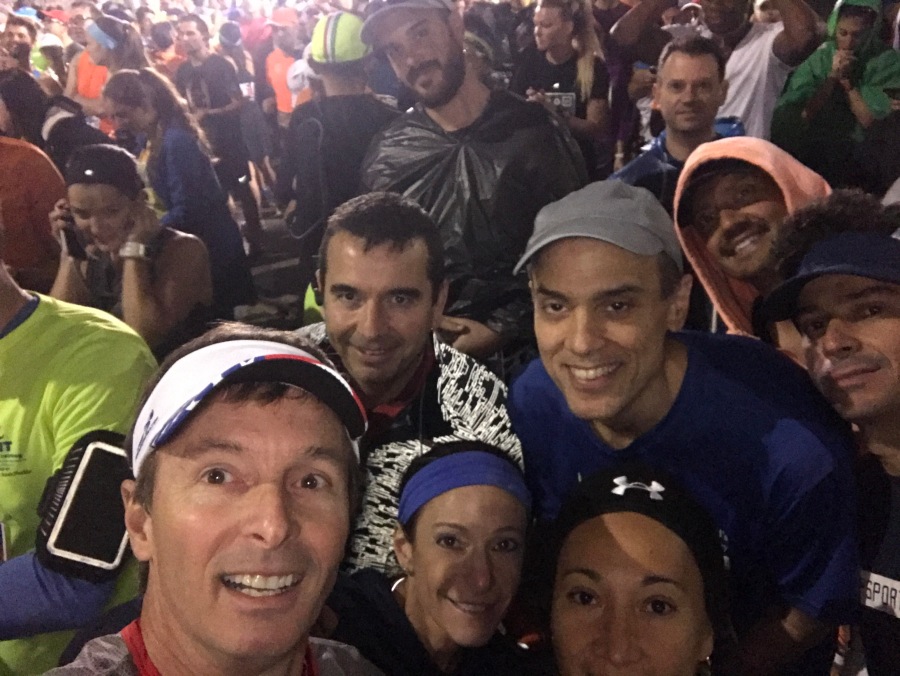 I met people in Corral E waiting for me from the Expo. I had 4 or 5 half marathoners, among them a friend named Jodi. Also, I had a few blue-bibbed full marathoners. Nicole, Jorge from Mexica, Leonardo, Maddy and a gal from NY dressed in all black. A few others stayed on the periphery, not talking or introducing themselves but definitely running with us. I went over the things I cover pre-race with my group: pace strategy, water stops, bathroom breaks, shoe lace tying and tidbits about the course. Some asked about the weather, I relayed what I knew… It would be cooler at the finish and we had an 80% chance of rain at 8:00 am. The race started on time and we didn’t have a prohibitive crowd running the first mile up the causeway hill. Staggering the start of the corrals has proven to be a good idea!

We ran the first mile 40 seconds slower than goal pace. I reassured everyone that we’d be on the right schedule very soon, 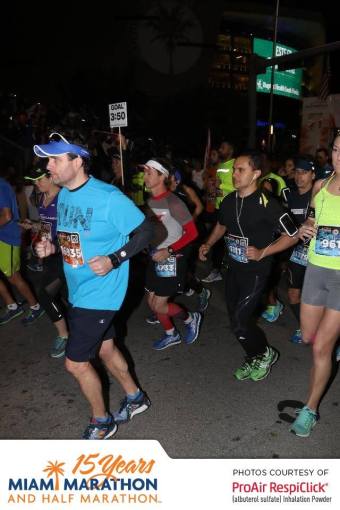 which was true. Mile 2 had us 25 secs off goal and Mile 3 was 12 secs above. It was dark and we had our first encounter with rain in the second mile. No changes for us, we were on the dark causeway distracted by the views of the cruise ships, a fireboat firing off the hoses in the air a la NYC, and a car ferry docking near the inlet. The rain stopped as we made Miami Beach, we ran around by Joe’s Stone Crab and up Ocean Drive with no showers.

A new part of the course had us run south on Washington Ave and then back north on Washington Ave again. We had more rain here on miles 5 -6 -7. My group was very good at keeping pace, we picked up another lady who spoke Spanish only, so I didn’t understand her name when she told me. The NY gal was good with conversation, I soon learned we had a big Spanish contingent that really wasn’t listening to me chime on in English. In my fourth year of pacing this race, this was new for me. Most everyone just smiled or made no reaction when I spoke directly to them. Odd, but the rain kept us quiet. I still gave advice, offered some touristy bits and helped th 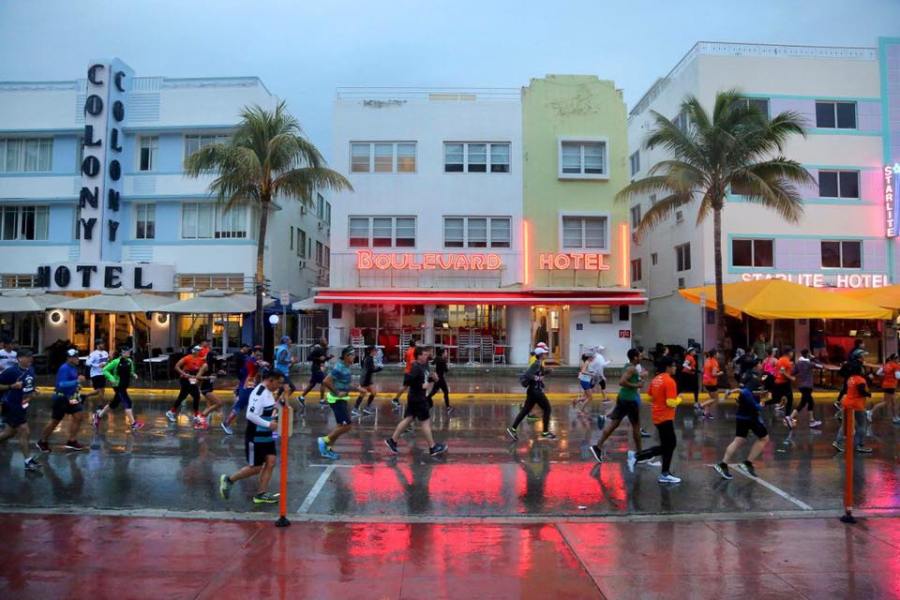 em know when water stops and aid stations were coming ahead. The Venetian Causeway was open this year, a welcome change from doing the Causeway bridge again at Mile 10 like last year!

On the Venetian Causeway, I picked up two full marathoners, Andres and Riccardo. Andres was wearing my home run club’s bright orange shirt, Riccardo was tall and dressed in black. They both ran up front with me and did some talking, which was perfect as we approached Miami. We were on pace for the miles 7 thru 11. Once we hit the mainland, it’s only 3 more miles with the half marathoners before we go south with just the full marathon runners. Maddy, who had drifted off to run and talk with a “cute guy” that spoke her language, was now back in our fold. We ran in the rain through Overtown and past various drum lines and bands. It was good to have fan support again. I was definitely getting cold. We parted with our orange-bib half marathoners and began heading south. Andres commented that, “They are weak” for not doing the full. This was his first marathon, he was big on the bravado to psych himself up, I guess! We crossed the halfway point at about 5 seconds off pace. I think  we slowed through the half/full split area.

Once at Mile 14 we went over the last significant rise in the course. Andres, Riccardo, Maddi and a few others headed away from downtown towards Coconut Grove. I took a pee break at the Mile 15 porta-potties, I told the group to stay at the same pace and I’d catch them. It wasn’t difficult, it felt good to stretch out and pick up the pace for a few minutes to catch them. And Andres’ screaming orange shirt was very easy to spot. We went through the neighborhood areas then into miles 18-20 in Coconut Grove. Andres dropped off, but we picked up a guy in red with headphones and a Camelbak. He would not drink at the aid stations, but he always stayed to the right in the way of everyone trying to get Gatorade or water. Annoying!

Riccardo and a girl in a sports bra (Mimi?) were my closest runners, with a few in tow hanging on to our pace. The rain started up again near mile 22, here’s where we turn to run to, under, and back from the Rickenbacker Causeway. on this stretch I was mostly with the Camelbak guy and Mimi, Riccardo made a move to go for better than 3:50. Another guy in a blue shirt who was with us for awhile started to fade. A few others passed me – I encouraged them in the rain to go for the finish, they were running strong in the final two and a half miles.

The rain really picked up for our finish. I was alone and on pace in the final mile. I kept checking behind me to see if I could urge another follower to run in with me – no luck. The final small drawbridge at Mile 25.7 saw a few people walking and a good number of fans encouraging runners through the cold and rainy conditions. I finished up right near perfect time, (3:49:34) and quickly lost plenty of heat waiting for Helen to take the pacer signs. A few of my runners stopped to thank me, one older guy who I didn’t catch his name said he had paced with me three years in a row and was happy with his time. I quickly made my way to the VIP zone once Helen took my signs – the weather was getting worse and I was standing around in wet clothes. Coffee, eggs, bacon, it all helped! 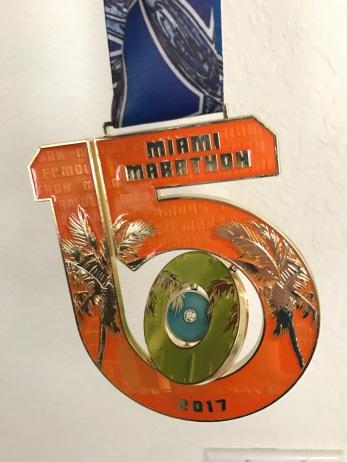