2.4 mi swim/112 mi bike/26 mi run. For every oval sticker on the back of a car, for every red logo tattoo on the back of a calf muscle, there’s a story. These are things I recall from yesterday, only 12 hours from my finish. Instead of crafting the thoughts into a chronological listing – for this post I’ll empty them in no specific order. The raw nature of doing this will bring out what I remember most. And I have some pictures to help the story… 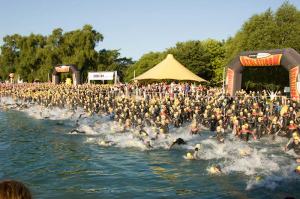 Swimming. I had seen a few YouTube videos of the swim start for Zurich, I was always focused on the mass number of people that poured into the water after the start horn blared. Being there, you could see that the swim beach was not big enough to hold all 2600 racers across the sand, they were lined up 12-15 deep charging into the water. A special “ladies area” was apportioned to the left of the diving platform, that’s where Suzanne and Lanae began their race.They said a few guys mixed in to start with girls, and they may have opted to swim in the mass start if they knew that was the case. Lanae said many of her encounters on and under other athletes came from ther women! I stayed in the middle of the crowd, foolishly, about 3-4 people off the water for my start. So many people from each side funneled into the buoy marked lane for the race. My first 800m (guess) was a complete street-fight, with no deliberately mean incidents, just too many people vying for too little space – all
heading in approximately the same direction. The elimination of wetsuits really threw many of the Euro competitors into a frenzy – they usually only know swimming with a wetsuit in cool waters. The idea of a bare chested pool swim for 2+ miles was concerning to many. It showed in the results.

I’d certainly visit Zurich again to do this race, and I know my next long course triathlon will be faster and I’ll have more experience in fueling myself and spending energy. What a race!

Chasing The Unicorn Marathon (PA)September 13th, 2020
A special event we are traveling to for good BQ times.