21 mi. Long runs in the middle of August make me question whether I have wisely chosen my races for the year. When you train for Boston, it’s in the cooler months. This training for North Face Endurance Challenge has me out in the longest mileage weeks for the warmest two months of the year.

I started at Carlin Park, earlier than the parking lots opened. John’s cross country team planned to meet and run here at 9am, so if I could piece together a long run, meetingt he store group at 6 and finishing near the park – perfect! I started running south in the dark, making good progress. I feel it’s easy to run in the dark, very safe because you can see anyone or anything coming at you well inadvance. Plus the miles go by quickly. And knowing I’d be here again at least 3 more times up this stretch of A1-A, it was ok to go through the first lap without seeing the sights. I worea flashing light in the front attached to my 10k pack. That was loaded with Succeed pills and 3 gels. I made it down near the store too early, so I ran to the driveway of Sea Oats and back to the store in time for the start of the run. I drank some Accelerade pink drink, whci unlike last week ahd some flavor today. I found Dave and we started with the group. Dave Stone and Lilia collided in the middle of US-1, that shuts everyone up in a hurry! We ran at a good but “talkable pace” to the first water stop. I was sweating more than usual, it was hot and still. I made an interesting observatio – If I go to Juno Beach to train and I have a pair of running shoes on – I get still hot air. If I pull a bike out of my car, it’s guaranteed to be windy. More proof this weekend! We ran to the Inlet, chatting with groups as we passed. We stopeed at the Inlet for cold fluids. The men’s room there is so hot and stiflingly still, it need some ventilation I think! We came back south, stopped at Carlin Park for Dave to solve a stomach issue. 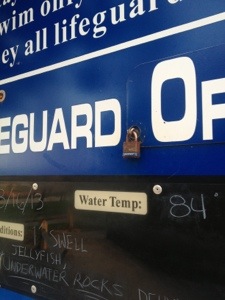 All bathrooms were being redone, porta potty awaits… I took these pics of the sun and status board while I waited for him.

I listened to a guy speak to a park employee about his upcoming trip to NZ. Looked to me like the park employee should be going to NZ, he had the Maori look of skin coloring and hair. We ran south in the increasing heat. The water coolers at turquoise rooves still had some cold fluids left, but only if you looseed the top and tipped them over to pour. Running back to the store, it was very hot – the breeze I had early am before sunrise was gone, now it was sun with no clouds and no moving air. We went back to the store, I talked only a little with some of the people there, then ran south on US-1 (new route!) to the J-Town Bikes area. Then I spun around, headed back up A1-A towards the pier and met barbara Broggi. While congratulating her on her gaining a new son as of adrianna’s wedding, she said I had only missed Chiara running by a few minutes. I kept going north, pacing with a girl runing well but alternating betwen walks a la Galloway method. I found Chiara at the truquoise rooves buildings – a surprise for both of us! we talked and she ran north with me – now I was less than a mile from my car and the end of the run. Right as I finished we saw Suzanne riding by – this led to more conversation about running, swim team for their girls and St Marks Day #1 on Tuesday. We broke up the conversation and I peeled off most of the wet clothes after showering in clean water. I mean if I’m going home wet, it doesn’t have to be “sweaty, smelly” wet, I can rinse off most of that before driving. A dash across to Carlin Park and it was beach time with the kids and parents.