26.2 Race – My most successful marathons have happened on this course or in Boston. I know to expect South Florida warmth for Palm Beach, Miami and Ft Lauderdale races. So… what went awry?

I stayed at Helen’s house again this year for the 3rd time. That’s a great time saver for me vs driving down the morning of the race. She is only 3 miles from the start. I parked in the same lot, now $8 vs the usual $5. I had been drinking pedialyte and water since late Friday, preparing for a warm run. I ate a dinner of salmon and white jasmine rice at 4:30 pm on Saturday so I would easily be ready and “lightweight” by the start time on Sunday. And the great Friday night meal with the Colavita Team was plenty of fun, I was in a really good frame of mind to do 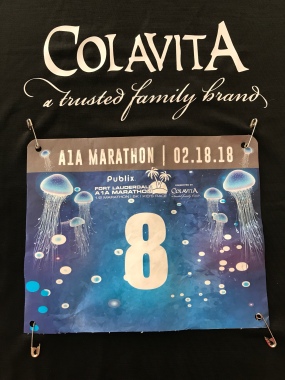 I met Erica and Stacy for the “team” photo on the steps of the Science museum, Eric didn’t make it due to lines at the porta potty. Maureen and Margo also met us there before the start. It was 71 degrees, I was ready for a good run on my most familiar marathon course. Dianne had made plans to put her car at Mile 9, a friend’s house. She would look for me on the “boring” miles of the full-only course. That was worth looking forward to! I knew that Janet and her family would be spectating somewhere near the finish area, that Julie and Helen would be with their daughters on the course, as well as any local half marathoners that decided to stay for the finish. I’d see folks I knew especially close to the last bit of running.

A good start, this year they stopped runners in groups every so often at the Start line to break up the groups into unofficial waves. This should have made less of a scramble down Las Olas Blvd and an easier time at the aid stations. I ran up the side of Las Olas, still wondering how some of the people manage to stay ahead of me for so long. I ended up zipping past 10-minute-per-mile runners 3 miles into the race…  I found Walter before the Las Olas bridge, he said Teresa was a bit further ahead. I didn’t catch up to her, though. I ran up the bridge and onto A1-A, all at what I believed was my proper average pace.

It’s dark at the beginning

I think this year, some of the mile markers were placed in the wrong spots. I may have been 15-20 seconds off perfect pace band time, but by mile 6 it said I was over a minute off? I ran as efficiently as I could among the people, running the tangents as well as possible. It’s easy to do once you’re on the full course. In the park, I ran up onto Gary Walk and said, “Hi” to him. I never registered a reading for my time at the 10k mark, which was near the exit to the park. I was sure to take the gels at 5-mile intervals and salt pills every 4 miles. I was aware that there could be a gastro-stomach kind of issue later, so I wanted to do everything as I know has worked well in the past.

It had gotten light out by the time I ran north on A1-A towards miles 7 and 8. I was ready to see the race leaders and my friends in the half marathon… Rick Mongeau, Erica, Lilia, they all passed heading south, but not as many as in past years. Everything was working well and feeling good when I broke away on the marathon full course. There weren’t many people ahead of me, but enough to see and slowly reel in at my 7:35-7:40-ish pace.

I get company from Dianne at Mile 9, she was dressed in a bright cycling vest she said she never gets to wear. I gave her some of my gels to carry, I didn’t need those until later in the morning. I was fine, running with her and talking, every once in awhile we would pass someone. I made sure I am was pace heading up the long straightaway between miles 11-13. I hit the halfway checkpoint at 1:40:02 – and I felt good. I did feel like I could repeat that effort.

I continued north past mile 14 and entered the turnaround neighborhood. My stomach didn’t feel good before Mile 15, so I adjusted my pace to see if slowing my heart rate would alleviate any feeling of needing to vomit. I had Dianne nearby, but I motioned to her that I wasn’t feeling well, so she drifted behind me and continued to thank volunteers and spectators. I remember talking a small bit, but I know it’s difficult to keep my pace on target. I hit Mile 16 and saw a few people I know running at me into the neighborhood.

To have a good race at A1-A, you HAVE to still feel good at this point, this is where it’s important to begin the fight to get home on time.

That’s not happening for me today. I shed the feeling of stomach issues somewhat, but I was now pacing at 7:50, 8:00, 8:05, 7:55. Not at 7:35 where I belong. I cannot have an issue here, I thought, it’s a ten-mile walk home. I told myself that it’s ok to ease off if I’m in a rough patch, I would hopefully feel better and gain speed later. I had all of my nutrition still and I didn’t feel thirsty or dehydrated. The sun was not out directly yet… I had about 1 hour and 15 minutes left to get 10 miles or so.

I felt the beginnings of small leg and calf cramps, but this seemed really early for that. I downed one of the Pickle Juice Sport drinks, I wasn’t sure if that helped. When I came back to A1-A near the halfway point for runners heading north, I told Dianne I would stop and stretch at the Mile 18 aid station. It seemed to help, but I was not carrying the proper pace for long after the stop-and-stretch. I had 2 miles on the long straightaway to Mile 20, then a dip for a mile into the Commercial Blvd Pier area. I stopped at the aid station, got more water, and took a pedialyte bottle from Dianne. I stretched again, but now I was really slowing down and needing to stretch more often. I was still far from the finish. This was going to take awhile.

The last 6 miles were a struggle, at any pace. I watched as other runners, girls and guys that seem to be over 50 ran right by. One guy was also struggling. He was not even doing 9-minute miles, but I kept passing him then stopping to stretch, allowing him to pass me. He was dying and I knew it, but I was doing WORSE. Dianne was good riding up and around me, chatting with others. She was concerned that maybe she shouldn’t be talking, thinking that it was bothering me. Not at all, I enjoyed that she was there, I could tell her how I felt and she weighed in with positive comments. Telling me things like, “You look strong” as I worked too hard to keep a lousy pace didn’t make me annoyed. I knew I  was really beat down and I had to figure out why. Not now, maybe next week.

The last 3 miles are along the beach where I encountered half distance finishers and fans cheering. It was difficult to be broken at this point on the course where in past years I’ve had good runs. I was hobbled, just like the three-plus hour half marathoners, looking to end this at the beach finish line. What a miserable feeling.

The last bit had me see Walter and Teresa, Janet, Tom and their kids, Ricky Montez and the Boca Tri group, Maureen, and Helen. I was not really capable of running an 8 minute pace into the finish chute, my lower legs were cramping and “percolating” with each step forward.

Once I finished, it took a few minutes to walk out of the finish area and get my checked bag. It was Nice having #8 this year, but I didn’t do it any justice by finishing in 3:41:08

Maureen and Dianne waited for me as I went into the ocean to cool off and wash the salt and road grit off my arms and legs. It felt cooler than I thought it would! It was about 4 hours after the start, and now the powerful sun came out. I was very glad I didn’t also have to deal with that – or my time may have been even longer!

The usual A1-A afterparty was fun, I saw many locals, other pacers, and I waited for Cammie and Jeff. The beer was so cold and properly doled out to runners only, making sure that even at the very end they had plenty to offer.

Eric did great on his full, with a 3:00:xx. Stacy wanted to pull back to the half, stayed on the full course and finished in over 4 hours. Erica did well with a 1:29 half and her first experience running with a pace team.

I’ve used the A1-A marathon as my “race to run” for plenty of years. I pace the other marathons, not putting in any specific training for that, just making sure I can do the miles. But that equation is not delivering good results anymore. Without the hard training that gave me PRs and BQs, I am now withering as a competitive age group marathoner. I am struggling to finish these events properly. There is no shortcut to the favorable results. And working well in my favor are the two pieces of confidence I have. I know what delivers good performances and I know I can physically do what’s required. 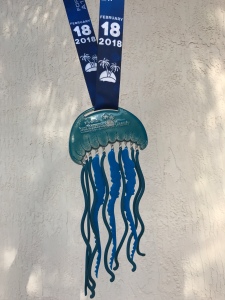 I’ll have more fitness for next year’s race, this won’t happen again.

Treasure Coast Tri Winter EditionDecember 4, 2022
Announcing duties for this one